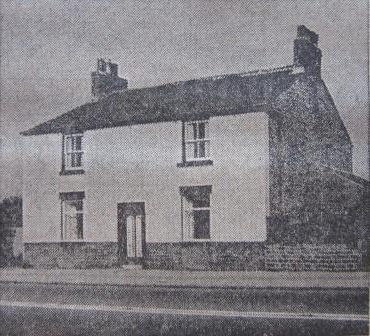 Originally called the Greyhound Inn when run by the Hodgkinson family the Ince Arms, named after the wealthy landowners was renamed some time in the 1860's, a name it retained until it closed for good when referred  for compensation in 1919.

The Ince Arms is one of several Victorian pubs in Euxton that are now long forgotten; others included the Anderton Arms, Red Lion, Gray Horse and Millwright's Arms.Often drink and crime goes hand in hand, including the pubs themselves. In 1879 Thomas Holding, of Euxton Mills, and John William Taylor, of the Ince Arms, were charged under the Food and Drugs Act for serving 'Adulterated Whiskey'. An undercover inspector visited both premises and ordered half a pint of whiskey in each. He then told the owners he would be taking it away for analysis. In both cases it was found the whiskey had been watered down and was about 15% weaker than ordinary whiskey. For this both men were fined 20 shillings and costs.
CHORLEY HISTORICAL AND ARCHAEOLOGICAL SOCIETY
A Walk Through Euxton's Criminal Past

Below is a newspaper clipping from the Chorley Guardian which provides the story of how the Ince Arms got its name.  The author has made one error though, recording the hotel's closure in 1908 when the 1911 census record shows this not to be the case...it is an interesting read though and suggests that the pub dated back to 1769.

An Assessment for the Relief of the Poor of the Township of Euxton, Lancashire made 4th October 1880 showed the landlord as James Hayley and owner W.J. Anderton of Euxton Hall.

The Rate for Special Expenses Assessment made 13th October 1897 on the Township of Euxton, Lancashire showed the landlord as John William Lees with the owner still being W.A.J. Anderton.

An Assessment for the Poor Rate for the Township of Euxton made 18th October 1910 showed the landlord as John Longworth and owner as Major W J Anderton.

As the press clipping below reveals, the Ince Arms licence was not renewed by the Licensing Magistrates in 1919 and the premises were referred for compensation due to their closure.