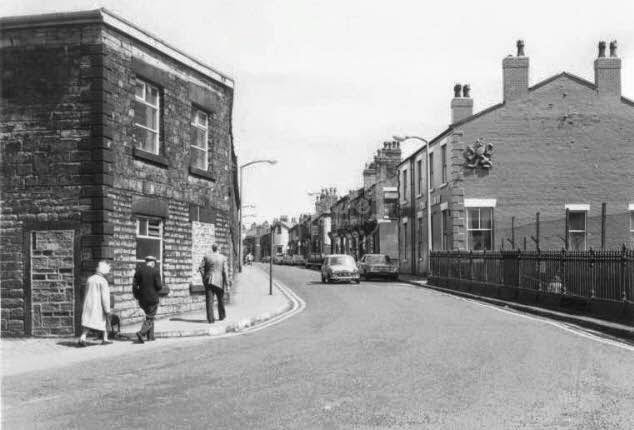 
“Most awfully deceived” in Chorley
This is No. 10 Parson’s Brow, Chorley. In 1893  this was the home of George Shellard, notorious in his day.  Shellard lived here with his wife and two daughters doing various jobs which often ended with him being fired; he apparently had a violent temper and liked a drink.
Shellard had been in the employ of Chorley Town Councillor (and future Mayor), Humphrey N. Whittle, for several months before being fired for misconduct and suspicion of an affair with Councillor Whittle’s wife.  Mrs Ellen Jane Whittle then moved away to Gresford, near Wrexham, from where she continued to exchange letters with Shellard and also send him money, but he grew increasingly frustrated with the relationship.  He managed to obtain a gun from the shop of Mr Aaron Hall, 42 Market Street, and then caught the train to Wrexham to meet with Mrs Whittle.  Before boarding the train he stopped for a drink and a cigar in The Railway Hotel, Chorley, when asked where he was heading he told the landlord that by tomorrow he would be in hell!
Mrs Whittle met Shellard at the station before going back to her house together.  Shellard then managed to get her alone in her bedroom where he shot her twice, once in the neck and again through the cheek.  The gun shots and screams attracted the attention of a house servant named Miss Taylor who came running into the room only to he threatened by Shellard, who said that if she raised the alarm he would blow her brains out.  Mrs Whittle was writhing around on the bed covered in blood when Shellard said, “Oh Lord!  I cannot see her suffering such misery.”  He then pulled out a razor and slit her throat before turning the gun on himself, saying, “I have finished her, and now I will follow her.”  Miss Taylor then ran screaming out of the room and called the police.  When she went back into the room she was astonished to see both Mrs Whittle and Shellard laying side by side in bed, the murderer being partly undressed.  A note was found in Shellard’s pocket declaring that he would, “come over and finish her, as it had been going on long enough.”
lancashirehistory.wordpress.com