This old Inn on the outskirts of Chorley started out as the Standish Arms with clear links to the Standish family who lived in nearby Duxbury Hall albeit for the last 150 years or so it has been known as the Yarrow Bridge, due to its proximity to the bridge over the river Yarrow (no surprises there!). 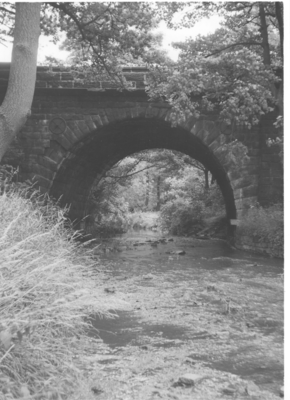 The Inn was used an auction house and for coroner's inquests during the 19th century like many of the established hotels in Chorley and the Chorley Motor Auctions was also being located on the same site in the 1900's. 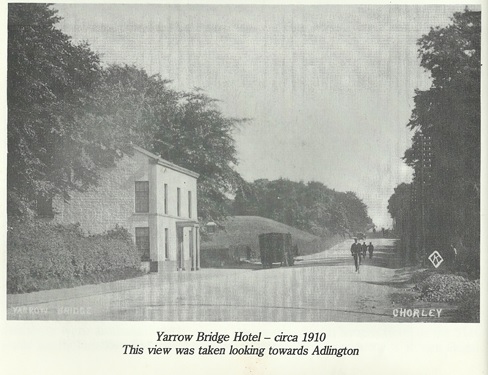 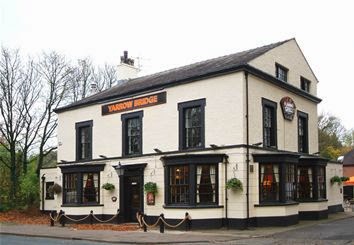 Tales of Duxbury and the Standish Family - by Irene Owen
The Duxbury family tree goes back as far as 1202. 1315 was a very important date, the Banastre rebellion. Lands of Standish and Shevington. Battles fought by close neighbours. Sir Henry de Burry was murdered. Standishes's took over Duxbury Hall. The Duxbury's were very influential, but the Standishes became more important. In the old barn of the old hall timbers dated to 15c. There was a Pele tower which protected the area and was also used for shelter. There have been huge stones found on the Duxbury estate which possibly were from the Pele tower. In the old barn, the chieftains barn, there was a bedchamber for the Lord and Lady and another one for the women. All the men slept in the hall. Hall 'ith Hill also a possible residence of the Duxburys. Bretters Farm was moated, and C.H.A.S. found remains of artefacts from Saxon times to 16c in the recent past. 1571 there is a court roll reference to the Manor House of Duxbury (Duxbury Hall). Also discovered, 6 pairs of oak crux (barn) on a stone base, fastened by three cross pieces. The Standish line family tree can be traced from 1221 to 1846. 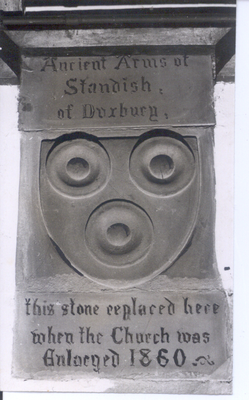 1434 Sir Roland Standish fought under Henry V at Agincourt and brought home the remains of St. Laurence and returned them to the Parish Church, Chorley (reputedly.) Lands connected to the Standishes also covered areas around Heapey, Duxbury, Worthington, Langtree, Heath Charnock, Chorley etc. The Lord became the tenant for life and had to look after the estate and its people. 1533 was the time of Henry V111 and the Reformation. The Standishes of Duxbury were Protestants and the Standishes of Standish were Catholics. Miles Standish was educated at Rivington Grammar School (the small old school, now a Junior school). 1622 Sir Thomas Standish rebuilt Duxbury Hall and and chapel (St. Wilfreds). 1670 the Hearth Tax was introduced, and 1727 the Cornmill was refurbished. Myles Standish, who was nicknamed Captain Shrimp sailed the Mayflower to Plymouth, Massachusetts. Hobernock who was a firm friend and stayed with him for the rest of his life. Three Standing Dishes are the Standish Coat of Arms. The two churches of St. Laurence and St. Wilfreds were very important to the Standish family. 1859 two thirds of Duxbury Hall burned down, then was rebuilt with the insurance monies. 1891 was the sale of Duxbury Park Estate. From 1898 to 1932 George Owens (Irene's husband) granddad was the Gamekeeper at Duxbury. Over the years the Cornwells were also part of Georges family.
The Yarrow Bridge hotel used to be called the Standish Arms. There were 4 Coal Mines at Duxbury, namely: Duxbury, Carr, Yarrow and Duxbury Park. Documents date back to 1354 for the Old Mill, and there was also quarrying and textiles carried on at Duxbury.

Press cuttings also reveal that there used to be a bowling green at the Yarrow Bridge. 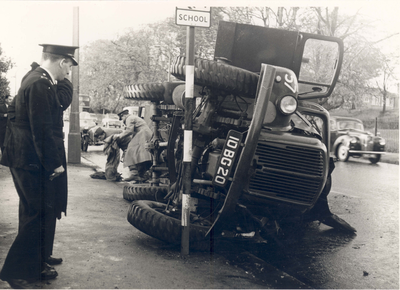 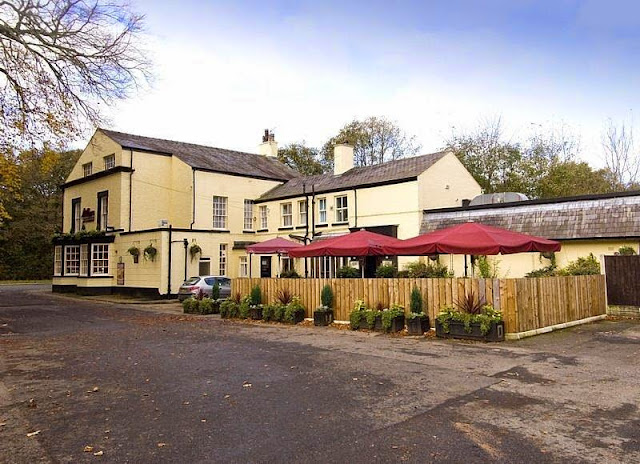