Name: The Waggon and Horses Inn

The Waggon & Horses like many rural beer houses started life as a working farm and only started selling beer sometime in the 1840's.  The 1841 Census record below records William Hart living there with his wife and nine children - his occupation is shown simply as a farmer.


By the time of the 1851 Census the Harts had moved on, the location was named the "Waggon & Horses Inn" and James Pilkington and his family were the tenants; James is shown as a "Farmer & Inn Keeper".

We know that James wasn't the first ever landlord from looking at the press release below which records William Marsden as being there in 1847. 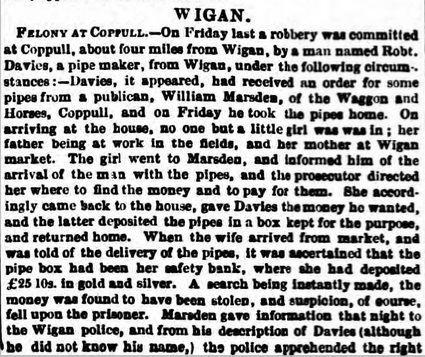 The Pilkington family continued running the Inn well into the 1880's so in total were there is excess of 30 years.  James died in 1875 at the age of 65 yrs. and his son George then took over. 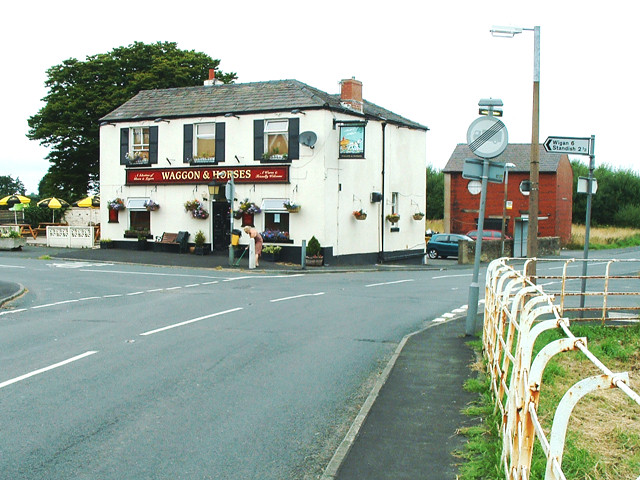 The 1911 census, which recorded William Lilley as the publican was the first record for 60 years that didn't show the premises as a farm as well as an Inn.

PEOPLE keen to get a foot on the property ladder now have the chance thanks to a new development with low cost homes. Eleven affordable homes have been built as part of a new housing estate called The Meadows on the site of the former Waggon and Horses pub in Chapel Lane, Coppull.
The two-bedroom houses are available for people to either rent or to buy, thanks to a partnership between Chorley Council and its social housing partners Chorley Community Housing (CCH) and Adactus Housing Group, and developer Arley Homes. Councillor Peter Malpas, who oversees housing at Chorley said: “It’s important that families and young people who want to live in their own home can afford to do so and we do everything we can to help them to get on the property ladder.” Seven of the new properties to rent have already been allocated to people from the Council’s housing waiting list.
The remaining four are being offered for sale by Adactus either through shared ownership or a new scheme called Rent to Homebuy.