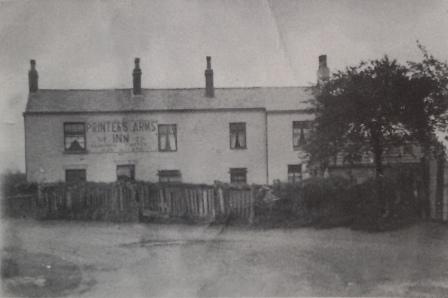 The Printers' Arms has been a beer house since around the 1850's and whilst it's current postal address is Coppull Hall Lane, in the 1800's it was listed as Chapel Lane on whose junction it stands.  It was originally a farm and later a shop ran by the Roscoe family before beer was put on the menu.

Reference is made to the pub's history on Coppull.net in the excerpt below: -

In 1830 Coppull was a rather unimportant agricultural area of a few cottages, houses and farms, and a small chapel to the east. A Mr. Yates lived at Ellison's Tenement (Station Farm) which was surrounded by a few cottages, then no buildings until Roe Hey Farm, the wheatsheaf cottages by the Wheatsheaf pub and Clayton Gate Farm at the top of Birkacre. Birkacre (the field where the birch trees grow) had a bleaching and cloth printing works.
The Printers Arms was then a shop, used by the handloom weavers who worked at Millstone Platt. The Horse and Waggon was in Church Fold across from the church. A few farms and cottages were scattered along Coppull Moor Lane and Preston Road. The Oak Tree Hotel was open, but the Springfield pub was then a farm.
About 800 people lived here, most of whom could neither read nor write. After 1850 Coppull began to grow rapidly, many new rows of houses were built to become the homes of coal miners and factory workers. There were many collieries and deep shafts were sunk for the John Pit, Springfield Pit, Blainscough, Hic Bibi, Darlingtons, Ellerbeck, Birkacre and Pearsons mines. Mineral lines carried coal tubs to the main railway.

Local records show the Roscoe family attended the Coppull Parish Chuch were they had their children baptised.  The records from 1832 record the baptism of Elizabeth Roscoe on 13th May 1832, daughter of James Roscoe & Lydia.  James is recorded as being a shopkeeper at this time.

The 1851 census records their home as "Goos(e) Green". Today, Goose Green Avenue is a cul-de-sac off Chapel Lane just along from the Printers’ Arms.

The Printers' Arms is thought to have derived its name from the Block Printers' Union who held their meetings there, its members being workers at the nearby Birkacre Dye Works. It is noted to have served beers from J.B Almond's of Standish and Hilton's ales.


Stood outside the Printers' are the landlords, almost certainly John and Catherine Booth who ran the pub for the around 20 years in the 1880/90's.  Notice the different building shape prior to the additional extension on the right side seen in other photos. 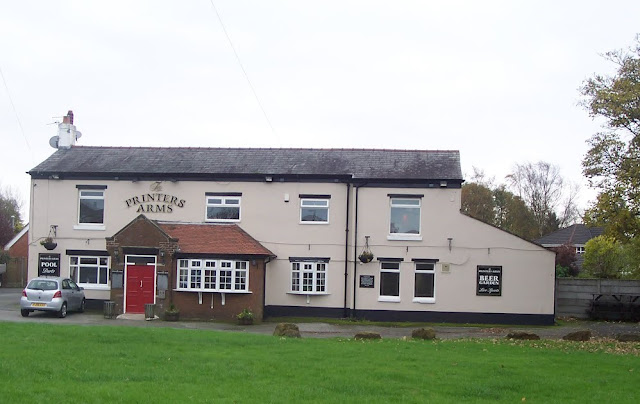 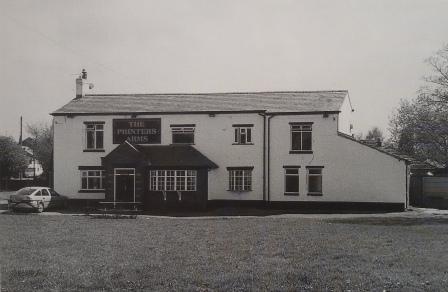