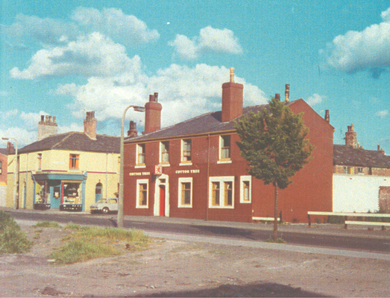 
At the time of the 1881 census the Cotton Tree was clearly between tenants and was unoccupied. Sometime between 1881 and 1891 the street numbers changed on Lyons Lane and Cotton Tree went from being number 128 to 162.


A Jane Houldsworth was running the Cotton Tree in 1891.  She is listed as a widow and the barman is her son, recorded as Joseph Houldsworth.  Earlier records show Jane's maiden name to be Barton and three years later her son Joseph Barton aka Houldsworth had taken over the Inn, his marriage record is below: -

At the time of 1901 Census Jane was living with her other son William Barton at 4 Buchanan Street, Chorley.