The Gillibrand Arms Hotel was originally known as the Black Bull's Head c.1700's and was one of the most important Inns in Chorley operating as both a licensed premises and a post office. The earliest recorded landlady of the Black Bull's head was Margaret Halliwell, recorded in the 1793 directory as "Inn and Post-Officer Keeper".  In 1815 the Inn changed its name to the Gillibrand Arms and landlords recorded thereafter included P Eastwood (1818), William Ward (1822-), Richard Ward (1835), William Ward (1839), John Smith (1841-51), Lawrence Alty (1853-5) and William Walker (1861-71).

The Gillibrand Arms was on the corner of Market Street and St. Thomas's Road but during the 1870's was demolished to make way for the new Town Hall, which was erected in 1879.  Census records for the Inn exist up to and including the one taken in 1871 as shown below: -


William Ward's wife Mary died in 1833 but the above marriage announcement in the Preston Chronicle above shows how he remarried only two years later to Mrs Sanson, the landlady of the Inn next-door, the Red Lion Hotel, which was in the hands of the Sanson family from the early 1800's until the 1860's.  Throughout the 1800's the Gillibrand Arms was utilised as Auction House, Court and Public House. 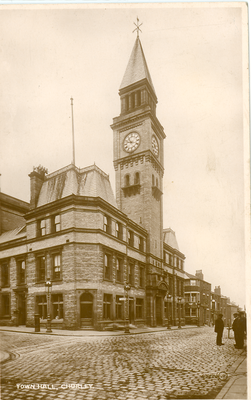