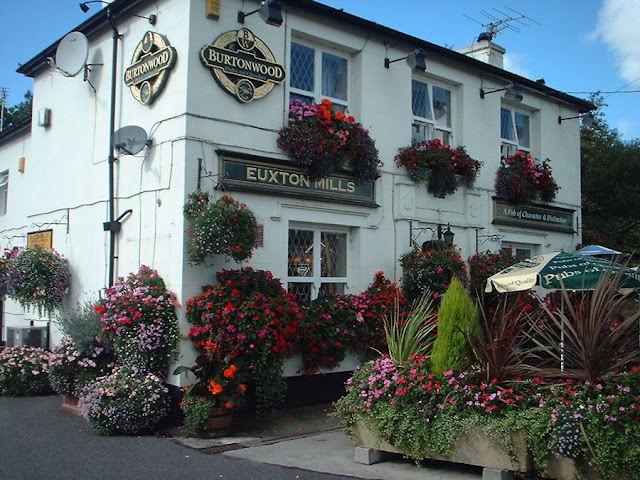 Euxton Mills was built as a coaching house in 1760; and originally called 'The Grapes'. The 19th century name change was probably due to the mills around the Pincock area providing much of the pub's business; the railway diminishing its importance as a coaching house. In 1851 it was just known as the Mills Tavern.

Taken from CHORLEY HISTORICAL AND ARCHAEOLOGICAL SOCIETY -
A Walk Through Euxton's Criminal Past.

In 1836 a man named Jacob Robinson had been drinking quite heavily in this pub and was walked back to his house on Pincock Street by two neighbours. Robinson was a 27 year old mill worker living with his wife Ann, they were both baptised, married, and eventually buried in St Andrew's, Leyland, but lived all their lives in Euxton. After arriving home Robinson heard shouting outside his house, it was William Gerrard, also of Euxton, shouting 'I'm coming, make thyself ready!' There had previously been a quarrel between the two men, the reason for which we do not know. A small crowd attempted to come between the men and Robinson said he did not want to fight. Gerrard, however, stripped to his waist and threw Robinson to the floor before repeatedly and violently beating him. Robinson managed to get to his feet and said: 'Though shall pay for this' to which Gerrard replied 'If I am to pay for this I will pay for more!' Robinson still did not want to fight and made the fatal decision to turn his back and walk away. Gerrard knocked him to the floor and attacked him. The London Morning Post reported, 'he was repeatedly punched by the prisoner with his foot while down, according to the style of fighting too commonly adopted in this county.' Robinson died there on the floor at the feet of Gerrard, who did not even receive a scratch in the fight. The coroner reported that the death blow had been a kick to the chest which had caused a laceration of the heart.

On the 6th August 1836 at the Lancaster Assizes William Gerrard was charged with 'killing and slaying Jacob Robinson.' He was found guilty of manslaughter and sentenced to seven years' transportation. Transportation to British colonies had been a common punishment since the 17th century. Convicts were required to work on government projects such as road construction, building, and mining. To most people it was seen as a way of easing prison numbers and generally improving society, to others it was seen as a form of slave labour. In the mid-19th century rates of criminal Transportation varied greatly according to sex and location. The vast majority of Transported criminals were male (including children) and most came from large industrial cities. London had the highest rate, followed by Lancashire, Bristol, and Surrey.

Gerrard was sent to Van Diemen's Land (modern day Tasmania) off the south coast of Australia aboard the ship Recovery. The ship docked on 8th October 1837 after a journey of nearly 5 months. Conditions aboard convict ships were notoriously bad at this date; convicts were kept below deck either chained up or in cells. 280 men set sail and 275 arrived, which was actually quite a good ratio compared to some. Pre 1840 most British and Irish convicts were sent to New South Wales, only the most dangerous criminals and repeat offenders were sent to Van Diemen's Land. Gerrard would have been in illustrious company!

An 1846 Convict Muster (similar to a Census) shows Gerrard still living with convicts in Van Diemen's Land, 3 years after he had served his sentence. He is recorded as having a Free Certificate. This meant very little to most, who could not afford to return to Britain and had few opportunities in Australia. Unfortunately the document trail then dries up. It can only be assumed that Gerrard lived out the rest of his life with some of the worst British criminals as a free man.


﻿
At the time of the 1851 census Elizabeth Peters was working in the hotel as barmaid and
later that year on 18th September she married William Turner at St Andrew's, Leyland. Records show William was a servant and Bachelor living in Euxton although he was born in Tofts in Norfolk, his father also being William Turner, a carpenter. Ralph Peters was recorded on the marriage record but had died shortly before the wedding aged 54 years leaving wife Margaret at the helm of the hotel.  He was buried on 25 Aug 1851 St Michael and All Angels, Croston, Lancashire.


In 1861 Margaret Peters was the landlady and William Turner was working there as the brewer but by 1871 William had taken over running the business.  Margaret was still living at the hotel but had clearly taken a backseat by that time; aged 70 years she was shown as an annuitant...lucky her!

Whilst the Turners were no longer running the Euxton Mills by 1881 Margaret was still living locally in nearby Croston and lived to the ripe old age of 82.  In 1881 she was living with William and Elizabeth in their new pub. She was buried at the Parish Church in Euxton on 1 August 1882.

An Assessment for the Relief of the Poor of the Township of Euxton, Lancashire made 4th October 1880 showed Thos Holding as the landlord; the owner was Peter Priestley.


Rate for Special Expenses Assessment made 13th October 1897 on the Township of Euxton, Lancashire showed Robert Barnes as the landlord and the owner was still Peter Priestley Esq.

An Assessment for the Poor Rate for the Township of Euxton made 18th October 1910 showed the new landlord to be James Best and owner Peter Priestley.

Although this pub has won acclaim to being the best kept pub in 2001, 2004 and 2006 it has many spooky goings on. It was built in the 1760’s and is a very old building.
It has been visited by the world famous medium Derek Acorah who named it one of the most haunted pubs in Britain and has mentioned the pub in one of his books. The landlord at the time Keith Burgess still was sceptical and a Non Believer in the paranormal. Even though he himself had experienced mysterious goings on such as things being switched on and off in the cellar and staff have had “scares” he is still convinced there is an explanation.
Besides the Grey Lady materialising in the pub which regulars have claimed to see there are said to be two more ghosts. There is a presence in the cellar and another lady residing in the ladies toilets.
The pub was also investigated by a team of American Ghostbusters and the group concluded they had found evidence of spirits in the pub and not of the alcoholic kind.
Sources: The Bolton News – http://www.theboltonnews.co.uk/archive/1999/04/02/Lancashire+Archive/6128559.Pub_is_haunted_say_US_ghost_hunters/
Lancashire Evening Post – http://www.lep.co.uk/news/local/ghostly_pub_s_landlord_is_a_non_be

News: Euxton Mills - Lancashire's Best Kept Pub
Monday, 25th October 2004
Keith and Alma Burgess can be very proud of themselves - the couple who run the Euxton Mills pub in the heart of Euxton have won this year's Best Kept Pub award in the Lancashire Best Kept Village competition.
Sponsored by Lancashire County Developments Ltd, the competition covers the whole of the county.
The Chairman of Lancashire County Council, County Councillor Nora Ward and the Chairman of LCDL, County Councillor Niki Penney, joined local county, town and parish councillors to congratulate the couple on their achievement.
County Councillor Ward said:
"Lancashire is a very beautiful county and we have many attractive pubs and restaurants. To win this section of the Lancashire Best Kept Village Competition is a real achievement and we congratulate Keith and Alma. I am sure this award will encourage even more people to visit the Euxton Mills and enjoy some real Lancashire food and drink in wonderful surroundings."
County Councillor Penney added:
"We sponsor this competition from LCDL because not only does it encourage people to visit our villages by ensuring they are attractive and well kept, but it also brings the community together with local people getting involved in litter picks, planting and generally looking after their local environment."