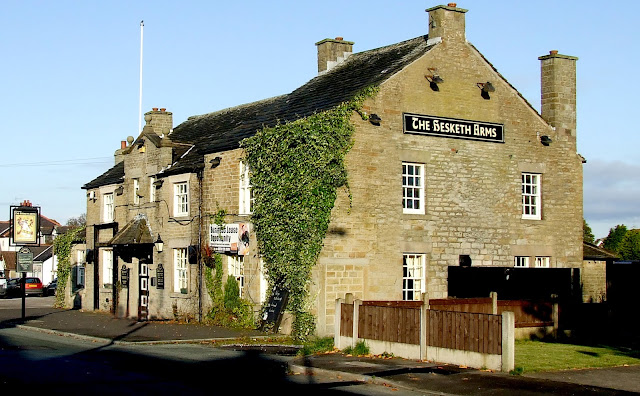 The Hesketh Arms or Thomas Hesketh Arms has been a feature in Shevington Moor since the late 1700's and is a Grade II listed building.  Historic England website describes it in the further detail.

HISTORY: Architectural evidence suggests that the building was built in the C18; features like its double front door suggest it was designed as a public house. The 1824 Alehouse Recognizance records the building as bearing the sign of the Hesketh Arms, with the proprietor as James Ranicar. The Heskeths were one of the principal landowners in the parish, having acquired the land in C16. The 1843 tithe map schedule confirms the Heskeths, namely Sir Thomas Dalrymple Hesketh, Bart, as owner of the public house, and Edward Dawber as the occupant. Edward Dawber had been listed as the publican in the 1841 census and remained so in 1851. The tithe map shows that the assembly room extension had been built by 1843. The 1894 Ordnance Survey map shows a single-storey extension had been added to the left (west), together with a long rear range apparently replacing the earlier extensions to the rear. By 1928 the building was in its present configuration, with added male and female toilet blocks, and an altered rear range.

REASONS FOR DESIGNATION The Hesketh Arms Public House and adjacent mounting block, 109 Shevington Moor, Shevington, is designated at Grade II for the following principal reasons:
Architectural interest: as an C18 rural pub built in the local vernacular tradition, but with a notably aggrandized front elevation, perhaps built for the principal landowners, the Heskeths, whose name it bears, later embellished in the early C20 with the addition of a deliberately archaic gablet with ball finials
Evolution: the further enhancement of the public house through the addition of an early C19 assembly room
Subsidiary feature: a stone mounting block adjacent to the assembly room extension makes a positive contribution to the streetscape as a relic of a pre-motorised age.


James Ranicar and his wife Ellen are the earliest recorded innkeepers of the Hesketh Arms and originated from Eccleston where they married in 1807. Whilst they left the Inn in the mid to late 1820s they were still living on Shevington Moor at the time of the 1841 census.

The Inn was a popular meeting house both socially and as a venue for the local Coroner's inquests as the press cuttings below reveal. 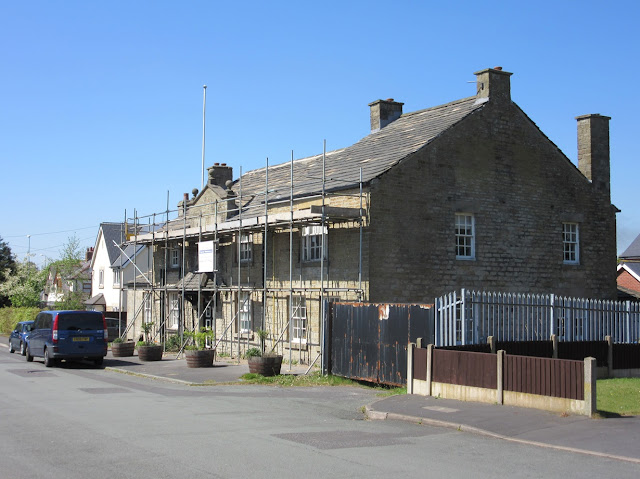 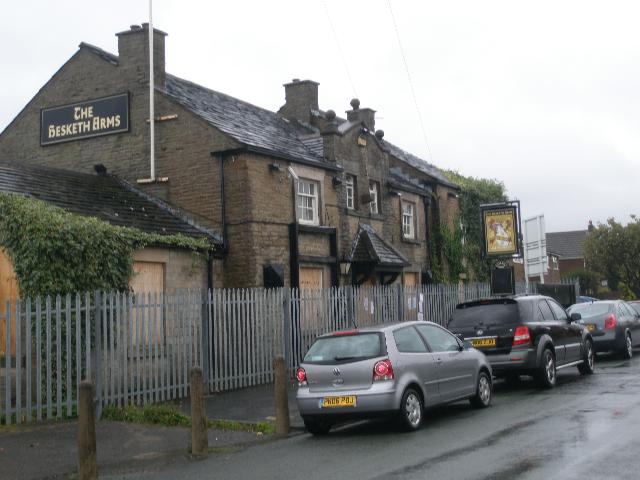 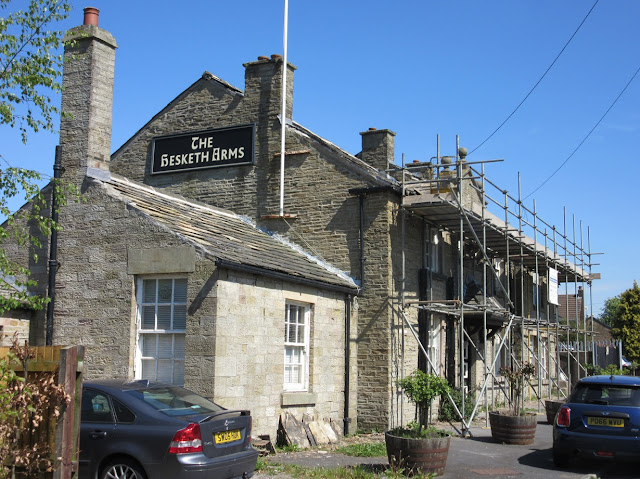 Since its closure in the 2000's and development of the land behind it for residential purposes there was a local drive to preserve the building leading it to be listed by Historic England.


The below press release reveals further history of the Inn.

Wigan Observer 11th November 2009
Campaigners are hoping an historic Wigan pub will be added to a national list of protected buildings. English Heritage conservation experts have been sent a document outlining the estimated age and various architectural features of the Hesketh Arms on Shevington Moor. The building – which could be more than 250 years old – was bought by an as-yet-unidentified developer earlier this year, prompting fears that it could be demolished. Wigan Council placed a six-month preservation notice on the building on September 10, but locals and former regulars hope it will be granted listed status.
Coun Angie Bland, who lives on Shevington Moor, said: "I had always assumed the pub was listed because it is so old. Hopefully, it now will be so we don't have this worry in future and it can't be touched."
According to the report submitted to English Heritage, compiled by Wigan Council's conservation department, the building began life as a farmhouse, alehouse and barn in the late-1700s. A building can be seen on the site of the Hesketh Arms on the 1763 Standish Manor Plan, and the pub – formerly known as the Thomas Hesketh Arms – was listed on the 1814 Alehouse Recognizance's. But "it is evident the building is much older, as identified via the property's internal and external architectural features," according to the report. An historic OS map from 1847 again shows the pub and a number of outlying buildings.
One of these is the forgotten Brown Cow pub, which lay to the south of the Hesketh Arms. All these buildings had slate roofs and walls built from stone sourced from the nearby Appley Bridge Quarry. Former Hesketh Arms landlords include Edward Dawber, who was listed as publican in both the 1841 and 1851 censuses, and his successor William Brindle. Mr Brindle is variously recorded as a victualler and farmer of 16 acres in 1861, as innkeeper and farmer of 14 acres in 1871 and as publican and coalmaster in 1881. Local legend actually dates the pub back further – it is claimed that Cromwell once stayed a night at the inn during the Civil War, which lasted from 1641-1651. Although the campaigners have accepted that the pub, which has struggled, may not reopen, they are keen that the building itself is preserved. 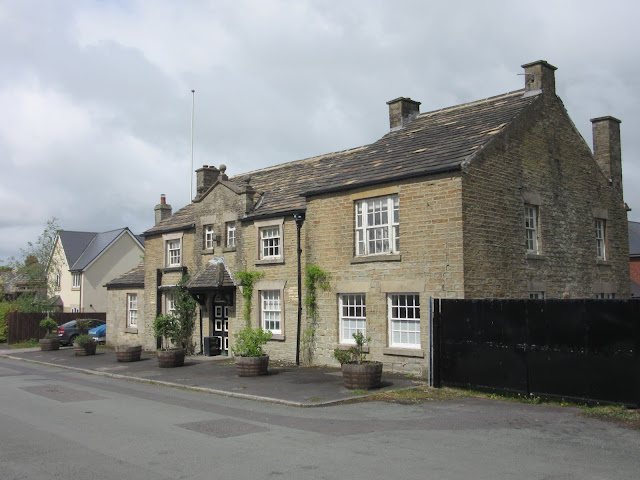 The photos above and below show the Hesketh Arms in Spring 2019, preserved and renovated into a fine residential property. 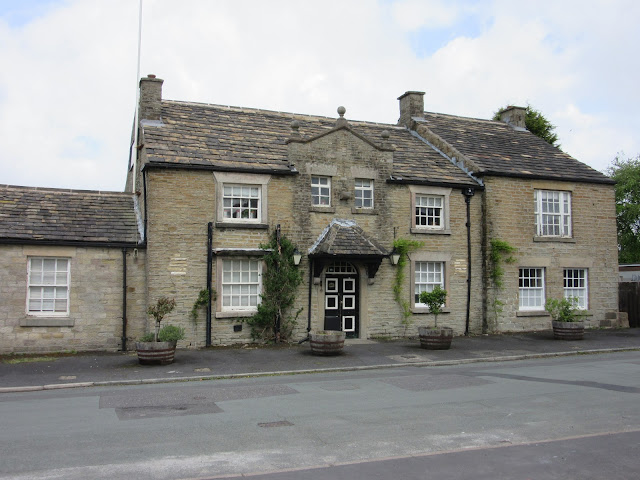