The Plough Inn probably dates back to the 1830/40s, although the original building (pictured above) almost certainly pre-dated that and was located in the area known as Pope Lane End, at the junction of Cop Lane. At this time it was a rural area predominantly given over to farming, not like today. It was within a stone's throw of the Black Bull with just the Smithy (Blacksmith's Shop) and Cottage between them; both beerhouses' names reflect the local farming communities.

Early records suggest the Smithy and Beerhouse were part of the same business and on census records the pub is the next residential property along from Brown's Row and the Black Bull Inn. As recorded below the Plough was very much the domain of local Blacksmiths on Pope Lane, many of whom ran the Inn for periods during the mid-late 1800s.

The building was clearly in existence at the time of the 1844 map below just around the bend from the Smithy.

Resident in 1841 was William Wareing, a weaver. Whether he also ran a beerhouse as a secondary source of income remains unclear but this was often the case around this time in order to make ends meet and was particularly so following the Beerhouse Act of 1830, which liberalised the regulations enabling anyone to brew and sell beer on payment of a licence costing two guineas. The intention was to increase competition between brewers, and it resulted in the opening of 56,000 beer houses across the country by 1836; the rapidly expanding industrial centres of the North of England saw their fair share, of which Preston was one.

Nicholas Knowles was the landlord of the Black Bull from the 1830s onwards and was recorded as a "shopkeeper" in the census above with William clearly shown at Pope Lane End.

Sometime in the 1840s William Mossman and his children moved to the Plough Inn having run the Fleece Inn on Liverpool Road for the preceding decade. William's wife Elizabeth died in 1845 so it was probably after this that William downsized from the busy Fleece Inn on the main thoroughfare to the Plough.


The Mossmans were from Scotland and moved to Penwortham sometime in the early 1820s before the birth of their daughter Elizabeth. William was to die in 1851 shortly after the census.


Following William's death it's unclear who ran the business in the 1850s but by 1861 a 23 year old single lass by the name of Hannah Breakell was behind the bar, living at the property with her younger brother Richard. They had been brought up in nearby Walton-le-Dale; their parents were farmers and whilst not in the trade I suspect she was related to both Hugh and Richard Breakell who were running the Farrington Arms on Liverpool Road and Blue Anchor, Hutton respectively around this time.

Hannah married William Thornley in 1867 and they moved to Preston where William worked as a Furniture Dealer. By the following year the Plough had a new landlord, John Ashcroft who originated from nearby Much/Little Hoole.

The 1861 census excerpt below shows that John Ashcroft and Henry Ryding were living and working on Pope Lane as Blacksmith and Wheelwright serving the local farming community and were to both run the Plough over the next couple of decades.

PRESTON POLICE INTELLIGENCE THEFT OF SHOES
A man named Charles Gardner was charged with stealing a pair of shoes, belonging to John Ashcroft, Plough Inn, Penwortham - the prisoner was committed for trial. Monday -before the Mayor and A. Leigh, Esq.
19 December 1868 - Preston Chronicle - Preston, Lancashire, England

The census confirms John was a Blacksmith and living at the Plough Inn in 1871.

Henry and Margaret Ryding took over the Inn sometime in the 1870s although his main trade was as a Blacksmith and 10 years later they were still running the Smithy but another Blacksmith, Adam Hatch had moved into the Plough.

LEYLAND LICENSING SESSIONS.
...with the permission of the Bench he would withdraw his objection to the renewal of the license held Hy. Snape, Plough Inn, Penwortham, as the ground of the objection had been removed. Permission was granted. All the licenses were renewed.
29 August 1892 - Lancashire Evening Post - Preston, Lancashire, England

INTERESTING HIRE-PURCHASE
Messrs. Crane and Sons, Ltd., brought an action in the Preston County Court on' Tuesday
against Joseph A. Smith, the Plough Inn, Penwortham, for the return of piano. Mr. Herbert Davies was for the plaintiffs, and. Mr. Ambler for the defendant.
13 January 1915 - Preston Herald - Preston, Lancashire, England 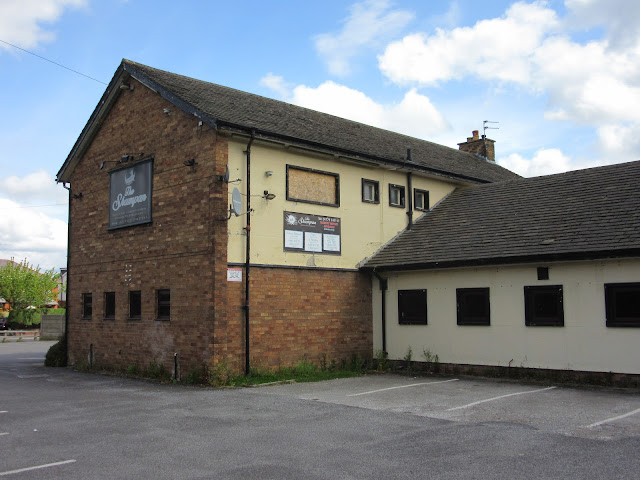 As the area around Pope Lane was developed for residential purposes during the latter half of the 20th century and as the social landscape changed the viability of two pubs within a stone's throw of one another lessened.

In 2007 the Plough Inn was finally closed following complaints of noise/disorder and was later converted into an Indian restaurant, which remained in business until May 2019. 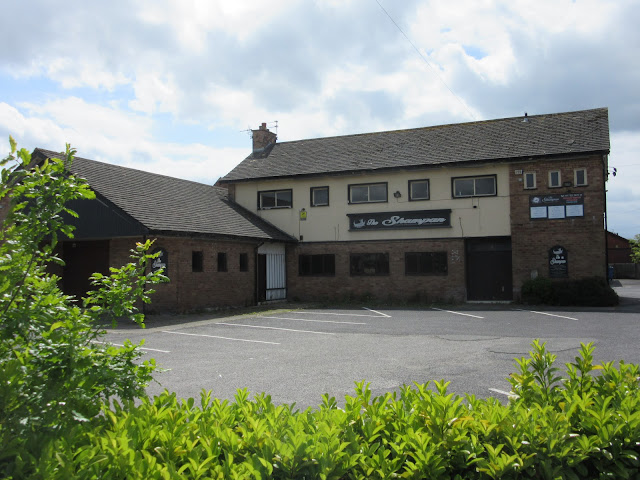