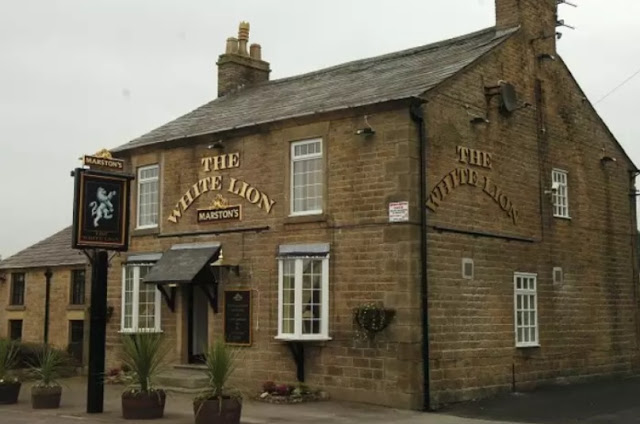 The White Lion Inn first appeared on local maps in 1845 as pictured below and was probably around long before that but I can find no reference to it on the 1841 census or directories.


The following information is from the pub's own website: -

Prior to 1931 The White Lion was run by Bill & Ann Norburn, who can be seen in a photo of the pub taken in 1926, which is on the wall in the bar. The pub's most famous Landlord is Robert Mawdesley known as Owd Bob, who ran the pub for 45 years from 1931 to 1976. A military man having being in the Queen's Guard, he and his wife Gwen ran the pub strictly as an alehouse ~ no wine or spirits, & the beer came in jugs straight from the cellar. Gwen, a keen gardener kept allotments & an Orchard at the back of the pub. Owd Bob a farrier used to shoe horses. His infamous time here means that many still refer to the place as ‘Owd Bobs’.

On Owd Bob's retirement the Greenall Whitley brewery bought the joining cottages, now the restaurant, in order to extend the pub. It is here we adopted the ghost of an old lady that died in the cottages, and many have seen objects fly off the window sills and the temperature suddenly change dramatically! After how many real ales this happens is a different question! The pub's name was also changed from the White Lion to the Tudor Inn. The pub was reopened in August 1977 by Tony Island & his wife who ran it successfully until 1982 when the pub was taken over by Alan & Joan Crompton until their retirement in 1995, and who built up a great reputation for a friendly family run traditional pub. If the walls of this pub could talk there would be some amazing stories to tell!

In October 2007, Matt and Ellie Furzeman refurbished the pub to how you see it today and changed the name back to The White Lion. It’s great to think of all the changes that have occurred throughout the last hundred years yet the pub is essentially the same as it was when the Norburn family ran it, still a local community pub.

In the spring of 2015 we won a garden make over competition care of Cuprinol. This is why it looks so bright and cheerful! One of our regulars nominated us for this … but we still don’t know who, so if it was you, please let us know!

Although the address of the White Lion is Wrightington the area is also known as ‘Hunger Hill’. This dates from August 1648 (a particularly wet & cold year!) when Oliver Cromwell for the Parliamentarians fought the Royalists in the battle of Preston. Cromwell secured Preston, the Royalists forces were much depleted & under the cover of darkness & heavy rain they withdrew in a bid to meet up with reinforcements on their way up from Wigan & outnumber the Parliamentarians. Unfortunately they were on different roads & missed one another. By which time Cromwell & his men had sent Colonel Thornhaugh with three regiments of cavalry in hot pursuit, Colonel Thornhaugh was mortally wounded in this area. Although they were 10,000 royalists to 5,500 parliamentarians they were demoralized, their supply wagons had been lost at Darwen bridge so hungry & exhausted they stopped here for some food – hence the name Hunger Hill. (When I say here I don’t mean in the pub… as it wasn’t built then! … and they certainly wouldn’t have been hungry!). The below extract is from the 1881 Directory of Wrightington and shows a number of the landlords at that time including James Taylor who was shortly to give way to John Holcroft behind the bar: -

The burial records below for John and Elizabeth Holcroft confirms that they ran the White Lion for in excess of 40 years, something which Robert Mawdesley replicated in the 20th century. 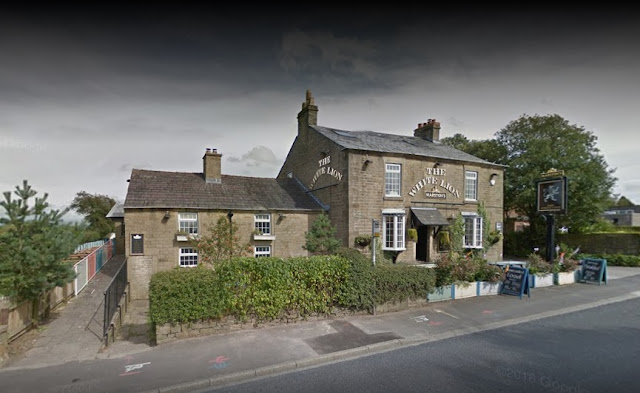