As part of the preparation for researching Horwich's Inns and Taverns I've used a variety of sources including local directories, census records, maps, BMD records, probate records and the Internet. It's by no means complete but I hope I've managed to cover all the main hostelries in the town over the past 200 years. Should you read the blog and have additional information I'd love to hear from you, so please post away.

The Bolton News is, as ever, a mine of information and articles about the history of the town and Wallsuches Bleach Works have been invaluable, particularly for someone who has never lived in the town such as myself. Some these records are recorded in full below.

1825 History Directory and Gazetteer of the County Palatine of Lancaster 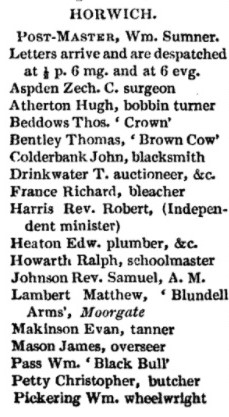 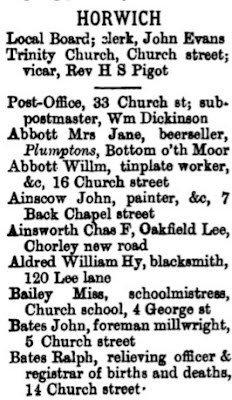 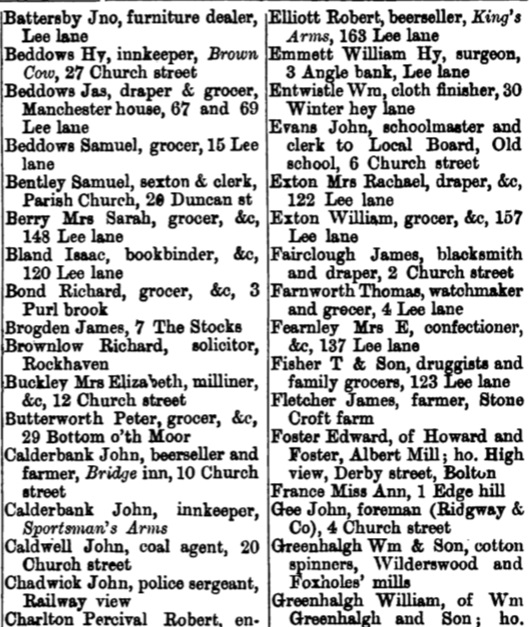 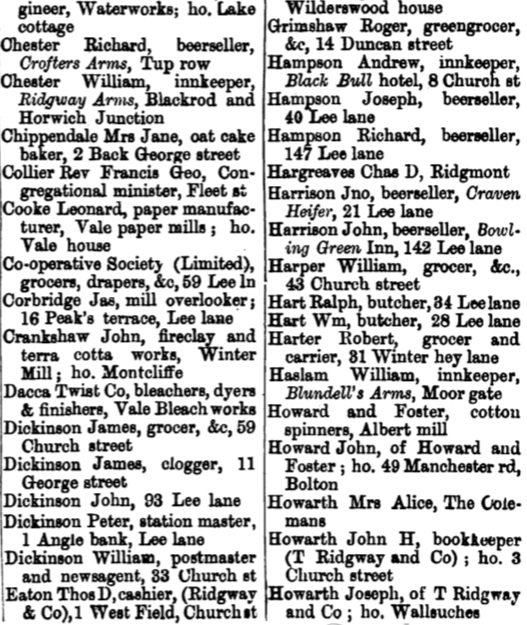 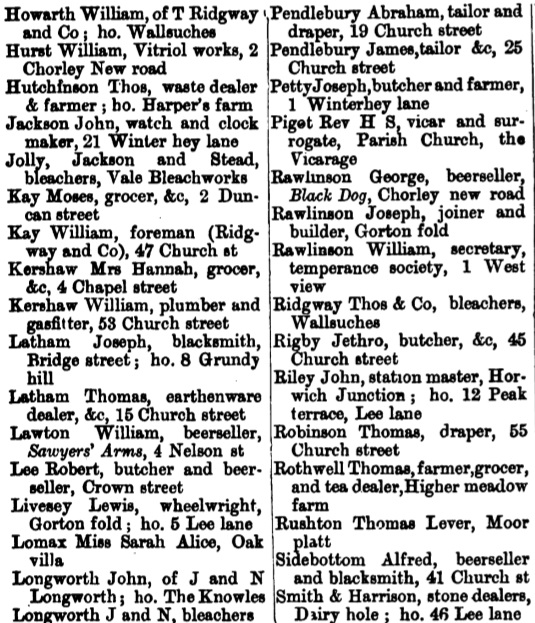 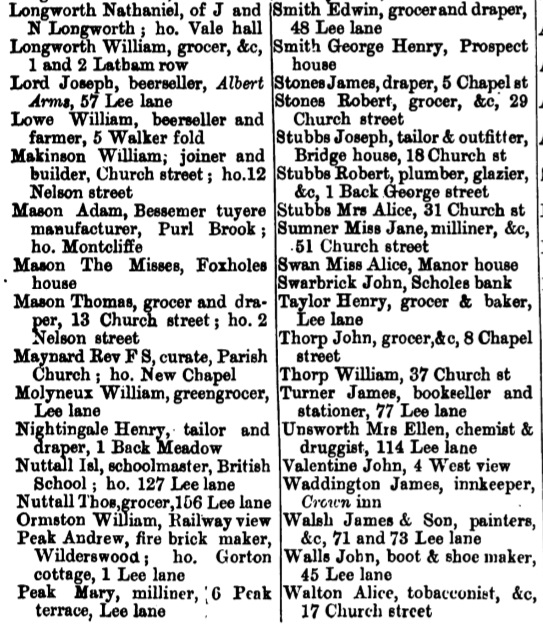 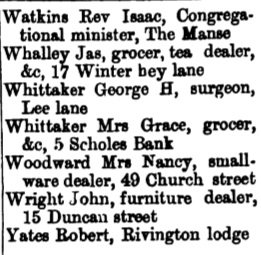 Bolton News 8th & 15th June 2016 History of Wallsuches, Horwich by Gayle McBain
Looking at Horwich today it is hard to imagine that it was once a tiny hamlet. Back in 1777 the Ridgways moved their bleach works from Bolton to Horwich and this paved the way for Horwich to grow into a thriving village during the 19th century — before the arrival of the Railway Works.
The first workers' houses were built in Horwich in 1801 and they were, and still are, known as the "club houses" — because the Ridgways formed a building club to help their workers buy or rent their own homes.
Horwich Heritage has an exhibition entitled "Wallsuches and the Club Houses" which opens at the Heritage Centre on Saturday June 25. Today Arcon Village occupies the Wallsuches spot where the bleach works and houses were built 200 years ago.
Stuart Whittle, chairman of Horwich Heritage, has produced a fascinating insight into the past of the town, dating back to 1620.
Here we look at the early years of Horwich followed by more in forthcoming issues of Looking Back.
In 1620, explains Stuart, Horwich was just a very small settlement with only 48 tenant pastures — the main activity being subsistence farming with the wealthier farms being up on the moors above Horwich where hand loom weaving supplemented the meagre family income.
"Cloth was washed and bleached in the local streams running down off the moor and although this activity was very small scale it contained the elements that would lead to the transformation of these tenant pastures into significant bleaching operations within the next 100 to 150 years," says Stuart.
Thomas Hampson, in his history of Horwich, describes the hamlet in the 1700s as being a bleak and cheerless place.
But it did, however, possess the essential ingredient for what would initially create a local bleaching industry and then provide the means of motive power — water and plenty of it.
"Bleaching at that time used the old "atmospheric" system where cloth was washed in sour milk and urine and stretched out across fields on tenterhooks to dry, explains Stuart.
"Something much more organised and efficient was necessary to make it a substantial industry.
"The pivotal moment was the introduction of chemical bleaching using chlorine and other chemicals.
"And there was one family in Bolton who recognised the importance of this breakthrough — the Ridgways. By doing so they transformed the fortunes of the humble hamlet of Horwich," adds Stuart.
Brothers John and Thomas Ridgway were, originally, bleachers at Dog Brow in Bolton which is now the site of the market hall. A fire at their premises in 1775 prompted them to look for a larger site and they took out a 99 year lease on land at Wallsuches in Horwich in 1777. Horwich at this time only had 365 people.
No one knows how the area got its name, remarks Stuart, but it is said it was derived from the way the Ridgways issued their building instructs: "We'll have another wall at such and such tomorrow." But Stuart says: "It's not an entirely convincing explanation."
Within three years the bleach works had six water wheels driving the machinery.
The company, which now included sons Joseph and Thomas, was one of the first to introduce Boulton and Watt steam engines to replace water power.
The Ridgways seems to have a good attitude towards their workers although dishonestly was not tolerated and there is a record of one of their workers, John Boothman, being transported to Australia for stealing £20 in 1802 and James Holland was one of a number of men executed in the Bolton area for stealing 30 yards of cloth.
The family assisted with the building of the Parish Church School in 1793 and the re-building of the Parish Church in 1830.
A building club was set up by the family in 1802 so that employees could construct their own homes — this attractive area of stone terraces directly opposite the Parish Church is still known today as the "Club Houses".
The Black Bull was used as the meeting place of various bodies. Joseph Ridgway became chairman of the local magistrates' bench and the family was instrumental in bringing the penny post to Horwich in 1815.
Wallsuches was like a village in its own right with buildings and cobblestone roads surrounded by large reservoirs, quarries and mines.